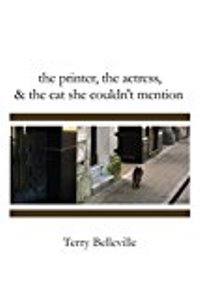 The printer, the actress, & the cat she couldn’t mention

Now, settled into a trendy, illegal sublet of a dead woman’s walk-up in New York City, Freya Locke carries bedpans through the shot in a daytime soap. At night, she acts in shabby theatres doing obscure plays. New York is a very big city with too many places to be lonely. So, one day Freya tells a lie. It’s a little lie but it pays off. People start to pay more attention. She’s even become so interesting that the self-obsessed dude she’s been stalking may drop the restraining order.

Inevitably though, that day arrives when honesty matters. The life she has so carefully created is seriously threatened. Why did she let it go so far? How could one little lie have become so dangerous?

WARNING: Not recommended reading for anyone who can’t laugh or be moved.

One thought on “Terry Belleville’s New Novel Available on Amazon! The printer, the actress & the cat she couldn’t mention”