It was a sparkling, fresh spring day and Gertie was wearing her favorite white and black polka dot dress, with her black high heels and her floppy, white sun hat.  She’d dressed her beautiful, new baby girl in a pink knit sweater and matching booties, gently placed her in the buggy, and started out on a brisk walk along the downtown streets.

She liked to parade her baby past the stores and shops because people often stopped and stared.  It made her feel proud, and she didn’t let it bother her when she offered them a closer look and they just walked away.   People were busy and in a hurry.  Yet when she pushed her baby across the intersections clogged with traffic, the drivers took time to stop, wave and shout.  She smiled and waved back, taking her time and enjoying the attention as they honked their horns and shouted louder.  No one could resist pausing to look at such a beautiful baby.

A couple of women passed and gave her scornful looks as they spoke quietly.  Gertie sighed and smiled.  Poor, jealous people.  Neither must be a mother.  Gertie was the lucky one.

About a block down, several adolescent boys got off of a school bus and walked toward her, laughing and pointing at her.  “That’s Gertie!” she heard one of them say.

Gertie recognized a couple of them.  Whenever they saw her, they followed her and wanted to cause trouble.  She turned the stroller around and walked faster, but she heard their footsteps getting closer.

“Hey, Gertie, you stink!  Why doncha take a bath?” one of them taunted.

The boys laughed hysterically as Gertie spun on them.  “Get outta here, you mutts!” she growled.

One of the boys reached into the stroller, pulled her baby out and threw it onto the sidewalk.  “Ooops!  You dropped your doll!”

Enraged, she grabbed at one of them before they all ran off, their laughter fading.  Gertie bent down to get her baby.

When she stood up, there was a woman in the store window looking back at her.  She wore a torn, dirty jacket and baggy pants, and she was holding a naked baby doll with one arm twisted in the wrong direction.  Gertie gently put her baby back in the stroller and started walking again, but the woman walked beside her.  Gertie took another look at her.  She had stringy, matted red hair and her face was grimy.  She pushed a shopping cart with several stuffed, white garbage bags and the broken doll sitting on top.

As Gertie kept walking, the woman in the window suddenly disappeared into the brick wall. 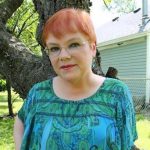