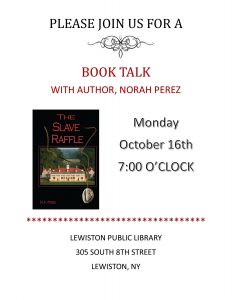 The Lewiston Writers’ Group is happy to participate in advertising a Book Talk scheduled at the Lewiston Public Library on October 16, 2017 at 7pm for Norah Perez. Without Norah Perez, our group would never have started!

Back in May, 2008, myself and three other future members of the Lewiston Writers’ Group attending creative writing workshops taught by Norah at the Lewiston Library.  We loved Norah and learned so much, and truly enjoyed spending time with other writers and exchanging feedback and ideas.  So…the four of us decided to go ahead and keep on meeting regularly on our own after Norah’s classes were finished…and that started the Lewiston Writers’ Group!

We’re coming up on our ten-year anniversary in the spring of 2018, and I know the reason we’ve lasted this long is because we followed Norah’s lead for conducting meetings.  She created a tone of acceptance, encouragement, only positive criticism/critique, and fellowship among writers.  Apparently that plan works, because it’s been nearly ten years now and our group has touched the lives of so many local writers.  Thank you, Norah!

Please join us on October 16 for an opportunity support Norah!